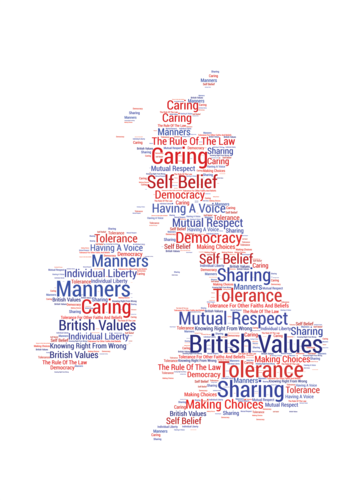 Our curriculum is under pinned by the ethos of the British Values curriculum. The values are:

Opportunities to teach and learn from these values are threaded through our curriculum consistently. We understand that the society we live in is diverse and therefore, our curriculum and life within school reflects this.  By promoting British values, we want all of our pupils to:

What it means to be British

We celebrate the role of Britain both historically and in the present. We want pupils to have knowledge of and be proud of their British heritage and the cultural and historical traditions that we are renowned for the world over.

Throughout the year we celebrate being part of Britain. In general terms this means we celebrate events such as Christmas, Harvest, Mothering Sunday, Remembrance Day.

Our curriculum reflects, celebrates and teaches pupils about diversity. For example, in RE pupils learn about other faiths. Within RE lessons, the pupils explore these faiths and we discuss others to look for any similarities and differences. They compare and contrast marriage customs and naming ceremony customs, for example, and have opportunities to visit different places of worship.

In Geography, pupils learn about their own locality. They also learn about Britain's place in Europe as well as other aspects of its rich heritage.

In History, pupils learn about key British figures such as Queen Elizabeth I and Queen Victoria. We study in detail key periods of British history including the Great Fire of London, the Tudors, the Victorians and the Second World War. We promote and reinforce British values in the following ways:

Our PSHE curriculum encourages all aspects of respect for democracy and the democratic process.

The annual election and work of our school council reflects British democracy. Each class from Year 2 vote for two (five in Year 6) school council representatives which gives classes a say on the decisions that are made at our school. The council meets regularly with Mrs Craine to discuss how they want to bring about positive change within our school. Our school council is very proactive in having its voice heard.

In Year 6, each house elects a captain after giving a speech to their house.

Individual pupils are also appointed for posts of responsibility in Year 6 such as register monitors and Praise assembly officers.

All pupils complete annual questionnaires, where they are able to put forward their views about the school.

We organise charity work throughout the year to support a range of charities and organisations including CAFOD, Knowl Manor (a local old people’s home) and St George’s Crypt.

Our local MP Andrea Jenkyns visited our school for a question and answer session with our Year 5 & 6 pupils. The Lord Mayor and local Councillors are frequent visitors to the school, attending productions, assemblies and other events, such as the Summer fair.

The Rule of Law

The importance of laws, whether they be those that govern the class, the school, or the country, are consistently reinforced. Pupils are taught the rules from an early age in the Foundation Stage. Each class have an agreed set of rules. The pupils are aware of the consequences of not following the rules in our school community.

Pupils learn to understand the difference between right and wrong in all aspects of school life throughout the day. There is an opportunity for children to put right what has been done wrong, wherever possible.

Through PSHE, pupils are given the opportunity to understand aspects of civil and criminal law and discuss how this might be different from some religious laws.

Pupils in our school expect and receive a fair system where actions are always respectfully justified.

Pupils are taught the value and reasons behind rules and laws; that they exist to govern and protect us, the responsibilities that this involves and the consequences when laws are broken. They understand that rules are there to keep us safe.

Visits from authority figures in society such as the fire brigade, the local community police officers, MPs and governors demonstrate to pupils how rules and laws are an integral part of a safe and happy Britain.

Alongside rules and laws, we promote freedom of choice and the right to respectfully express our views and beliefs as an integral part of what it is to be British.

Our pupils are actively encouraged to make choices, knowing that they are in a safe and supportive environment. As a school we educate and provide boundaries for young pupils to make informed choices, through a safe environment and an empowering education.

Pupils are encouraged to know, understand and exercise their rights and personal freedoms and are advised how to exercise these safely, for example through our PSHE, e-safety, drug awareness and RSHE lessons.

Our pupils are encouraged to give their opinions and share these ideas with due regard for the feelings of others.

As part of our PSHE curriculum, we place a huge emphasis on the social and emotional learning of our pupils and feel we send them off to secondary school as well-rounded individuals.

We celebrate achievements both in and out of school in our Weekly Praise assembly.

Pupils may choose to take part in our range of extra-curricular activities.

They are involved in their own learning and respond to their learning by feedback systems and self-review of marking.

All members of the school community treat each other with respect. Our pupils are taught and know how to show respect to everyone, no matter what our differences may be. Pupils learn that their behaviours have an effect on their own rights and those of others.

We promote diversity through our work about different faiths and cultures. Religious Education and PSHE lessons reinforce messages of tolerance and respect for others. Members of different faiths and religions are encouraged to share their knowledge to enhance learning within classes and the school. The pupils visit places of worship that are important to different faiths.

We use necessary cookies to make our site work. We'd also like to set optional analytics cookies to help us improve it. We won't set optional cookies unless you enable them. Using this tool will set a cookie on your device to remember your preferences.

Necessary cookies enable core functionality such as security, network management, and accessibility. You may disable these by changing your browser settings, but this may affect how the website functions.